As the world again struggles through what is predicted to be the hottest year on record, FOR THE SECOND YEAR IN A ROW, it would appear that denialist propaganda is having less impact, but we need to constantly re examine the trust being placed in those who say they want a safe climate for the future.

In Spain a heat exhaustion death was reported 12th July (abcnews) and scientists are preparing for next year’s ‘El Nino’ event of similar level to 1998. For the populations of Spain, Australia and the World, the media is silent about any connection between weather events and climate change.

There is no trace of urgency, no sense of direction, and, as with the global finances and systemic change, the can continues to be kicked down the street to provide the ‘lag time’ to extract every last dollar out of the earth’s resources.

In 2013, 350.org initiated an open letter objecting to Christiana Figueres’ close ties with the fossil fuel industries within the COP19 at Warsaw. The letter was also signed by 75 organisations from across civil society.

It would be appropriate for a similar initiative to be mounted now with the growth of the ‘Divestment/Leave it in the Ground’ campaign bringing new scrutiny to IPCC projections.

The woman who is guiding the UNFCCC process, Christiana Figueres, closed the ‘Our Common Future’ conference in Paris on July 10th with these remarks.

“The world’s leading researchers on climate have underlined the crucial importance of nations focusing on a long term goal–call it zero emissions, net zero or climate neutrality. The overwhelming consensus is that Paris 2015 needs to send an unequivocal signal that the world will take a path towards a steep and deep decline in greenhouse gas pollution by the second half of the century.”

This recipe for disaster allows business as usual for the next 35 years and then is solely reliant on carbon capture and storage as the ‘silver bullet’ to prevent planetary collapse.

Ms Figueres is well aware of the work of Kevin Anderson who categorically states that if we are interested in preventing 2 degrees of warming an 8/10% emissions reductions pathway is needed immediately. As most economists agree, this is incompatible with a growth economy.

Ms Figueres is also aware that current emissions trajectories predict a 4 / 6 degree celsius temperature increase and yet we are not to have a “steep and deep decline in greenhouse gas pollution” until “the second half of the century”.

Ms Figueres is also aware of the fact that many leading scientists regard 2 degrees as the beginning of the end and the goal should be BELOW 1.5 degrees.

Ms Figueres is also aware that there is NO carbon budget if the world were to set out to achieve 90% CERTAINTY of STAYING UNDER 2 degrees of warming.

Ms Figueres is also aware of the term “climate emergency” being used by the highest qualified scientists in the world. Her response is to move into the world of science fiction where “negative emissions” will be generated from 2050 from technology. Emergency, what emergency?

Geosequestration, third generation nuclear technology, genetically modified food and business as usual from the “Environmentalists” of the Breakthrough Institute have won the day. Andrew Revkin, Nordhaus/Schellenberger, Stuart Brand and their vision of the “Good Anthropocene”, where western industrialised lifestyles can be unaffected, is found to be much more palatable than the Degrowth Transition required.

The highest possible importance is being placed on business as usual, BY the woman who is overseeing the document which will be given to the Paris COP conference in November.

As Naomi Klein points out in her book, “This Changes Everything”, vested interests which have so much influence in the C.O.P. process know very well what the “only” solution can be to achieve climate and social justice. Shutting down the energy generation industry as soon as possible, a recognition of historical responsibility for emissions, including redistribution of wealth/technology with the Third World. Bigger government to regulate the remaining resources left in the world. Regulating the shipping/airline industries and taxing carbon emissions.

The governments that are now issuing the INDC’s to the U.N. are aware of this too.

There is no thought of financially regulating the fossil fuel industry to prevent a climate disaster. No thought of introducing a financial transactions tax to pay for climate change, or to close tax havens in an effort to have corporations ‘pay their share’.

So the U.N.F.C.C.C. has to go ‘cap in hand’ to the private sector for mitigation and adaptation costs immediately ruling out one of the cornerstones of climate change negotiations, equity.

For those interested, the following are extracts from the I.P.C.C. reports of 2007 and 2013 indicating the “emergency situation as it relates to Spain”. Bear in mind that “steep and deep” emissions reductions are now recommended, by Ms Figuerres AFTER 2050, TOO LITTLE TOO LATE.

This is how the 2007 IPCC report saw the future of Europe.

The scenario paints a very desertified Spain being 5 degrees celsius hotter in the summer months by 2090 with up to 50% reduction in rainfall. In some journals Spain is described as becoming an extension of the Sahara Desert. The major problem is that 2.5p.p.m. of co2 is added to the atmosphere every year making the very real possibility of 2 degrees of warming being “locked in” by 2030.

The 2013 IPCC report has recognised the extreme impacts that are projected for the Mediterranean region and devoted a lot more research and analysis. Southern Europe has been separated and its main climatic heat influence, the African Deserts, have been analysed. 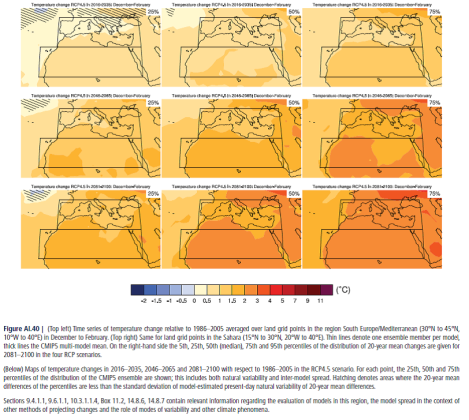 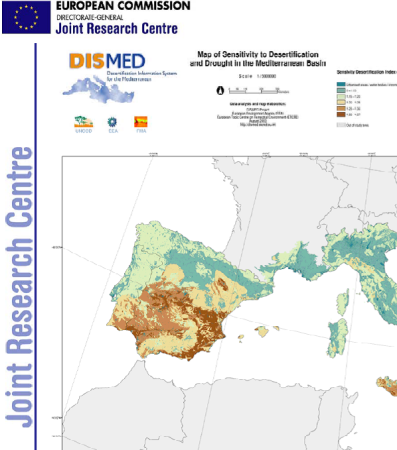